We offer tailored solutions, not pre-packaged products. We have had the opportunity to work with lots of amazing customers and get creative with some highly complex requirements. Technology has changed a lot since we first started, but our approach to business has never wavered; each customer is unique and through face-to-face engagement our staff can identify the best way to achieve your goals. 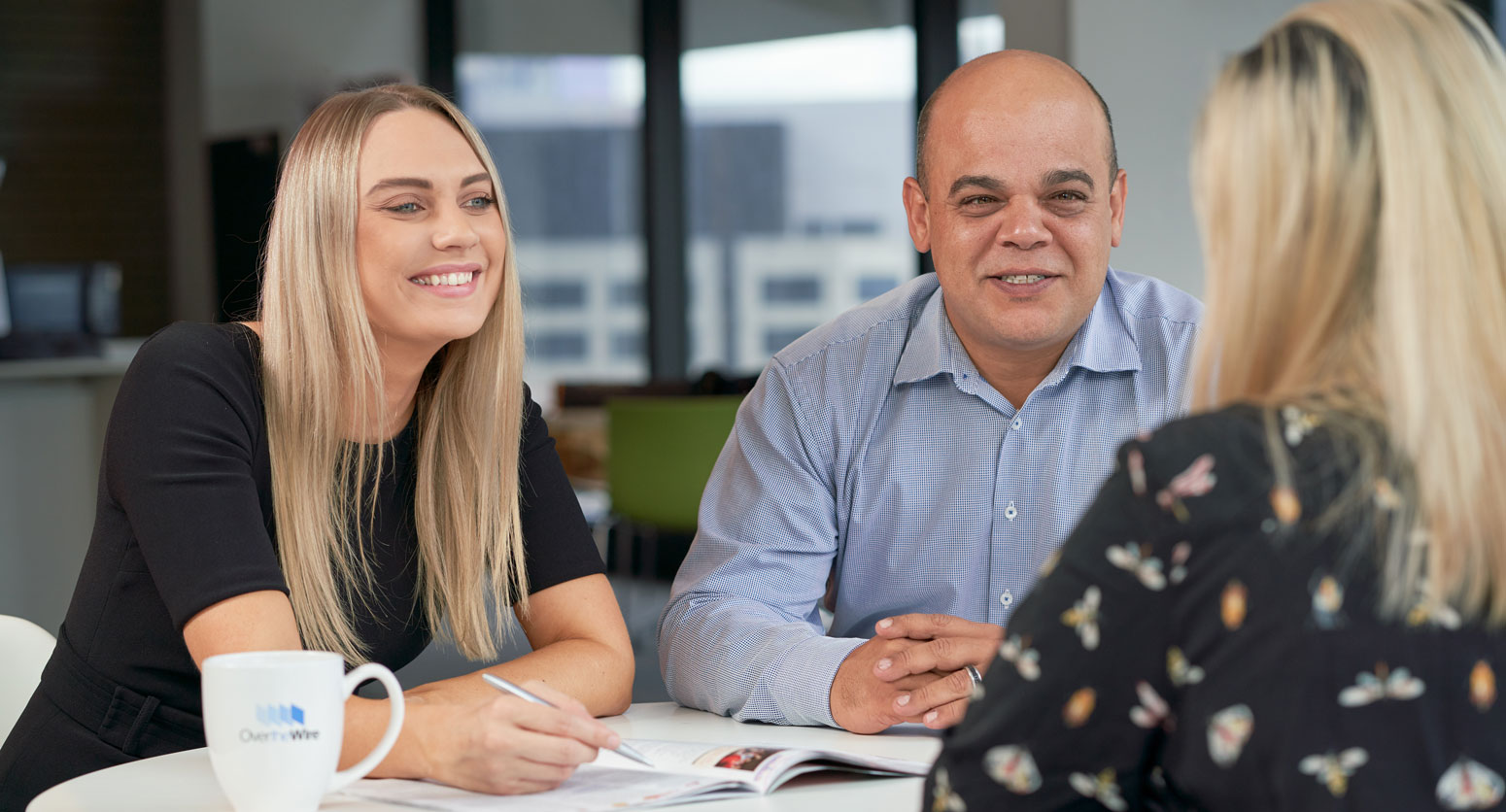 We’ve built a reputation as the leading choice for companies who are looking for an IT & Telecommunications provider they can count on. By getting to know your business, and giving you straight-forward, no-nonsense advice, we'll become your trusted technology adviser.

Effective telecommunications is the backbone of modern business. Reliable networks to stay productive, intelligent phone systems to ensure efficiency, and high levels of data security to keep your business reputation protected. These shouldn't be negotiable. They should come as standard. At Over the Wire we specialise in designing, deploying, and integrating these solutions so your business can get back to what you do best.

More than a provider. A trusted partner.

Your one-stop-shop for IT & Telco

1000's of Happy Customers
ASX Listed Since 2015
Your Local Experts

Over the Wire offers superior levels of customer focus resulting in 98.5% retention of customers in 2020. 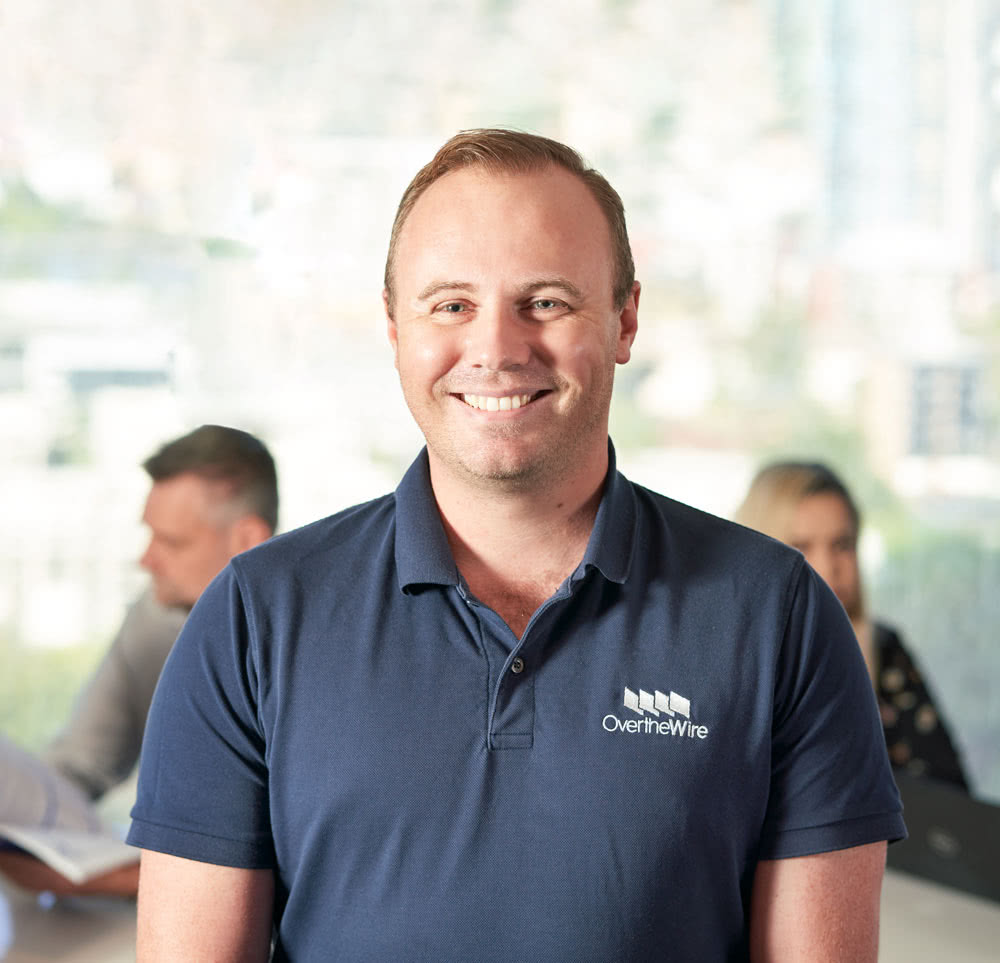 To be the technology solution partner most passionately promoted by our customers.

Over the Wire has been trading since 2007 and employs over 150 staff across our offices in Brisbane, Sydney, Melbourne and Adelaide. Our people are our greatest asset and their passion for the business is reflected in our strong growth.

Our management team is made up of highly experienced professionals who are fully committed to providing high-quality, customer-focused IT and Telecommunications services. Each member of our team is an expert in their own area. Together the team effectively combines tech-savvy with business nous – a formidable combination.

Michael is the Managing Director of Over the Wire and has more than 25 year’s experience as an entrepreneur, senior executive and Director in the IT, telecommunications and data industries.

Following the completion of a Bachelor of Engineering – Electronics (First Class Honours) and Bachelor of IT (with Distinction) in 1994, Michael worked in a senior management role at GBST and for Zurich Insurance in the UK before returning to Brisbane.

Between 2007 and 2011 he joined with business partners Brent Paddon and Jay Binks to create a range of high growth businesses in the telecommunications, cloud and IT industries with a particular focus on providing corporate clients with access to an integrated suite of products and services.  In 2009 Over the Wire debuted in the BRW Fast Starters list.

In 2015, Michael led the consolidation and ASX-listing of a number of businesses under the Over the Wire umbrella including NetSIP, VoIP and PBX provider FaktorTel and data and hosting business Sanity Technology. As part of the listing the company raised $10 million and was listed with a market capitalisation of $43.5 million.

Since listing, Michael has overseen a significant expansion of the company through a combination of organic growth and acquisition. Today, Over the Wire has approximately 300 employees, over 16,000 customers, annual revenue of more than $112 million (FY21) and a market capitalisation of nearly $300 million. Michael remains the largest shareholder in Over the Wire.

Ben joined Over the Wire in November 2018 as Financial Controller.

Ben is a member of the Institute of Chartered Accountants with over 10 years experience. Prior to joining Over the Wire, he was Audit Manager at PKF.

Gary was appointed COO of Over the Wire in September 2018. Gary is focussing on further improving the Over the Wire customer experience and establishing scalable and sustainable systems and processes to support Over the Wire’s growth strategy.

Ben was appointed General Manager – Voice and Data in 2012, quickly taking the reigns as COO and then CTO for the Over the Wire group of companies.

He has 20 years of experience in the telecommunications sector, specifically around running data communications networks and managing 24×7 Network Operations Centres.

Prior to Over the Wire, Ben was Practice Manager for the Voice & Data business at Brennan IT and Operations Manager at Iexec.

Mike joined Over the Wire in September 2020 through the acquisition of the Fonebox and Zintel businesses where he was the Regional Managing Director. He was appointed to the position of Chief Revenue Officer (CRO) in March 2021.

Jay has been responsible for building Over the Wire’s voice platform, NetSIP, and has been instrumental in building this into a core solution category for the company. Jay is focusing on the strategic direction of the group’s Collaboration Pillar along with the successful implementation of new offerings to benefit Australian businesses.

Rebecca joined Over the Wire in April 2018. Rebecca is focussing on implementing a program of work that develops our talent and builds a happy, engaged, customer focused environment that delivers business growth and creates a thriving workplace.

Dennis joined Over the Wire after the acquisition of Telarus where he was the CEO. Dennis is focussing on expanding the organic growth of the company through targeted marketing and sales execution of new business opportunities.

Receiving awards isn't why we do what we do, but the recognition is always appreciated. Here are some of our achievements we're most proud of.

Meet with our team, talk directly with our engineers, and start improving your technology today.